My wife and I have a deal going on -- if she cooks, then I wash the dishes. If I cook, then she washes the dishes. Both of us hate washing dishes, especially the frying pan which absolutely cannot go in the dishwasher (we tried it once but destroyed a non-stick frying pan in the process).

Recently, we switched to a cast-iron frying pan after our white ceramic frying pan turned brown and lost its non-stick functionality. It was a $25 investment that lasted for 6 months. We thought about switching to cast-iron after hearing from friends about not needing to wash such cookware after cooking. Oh man, what a dream come true! 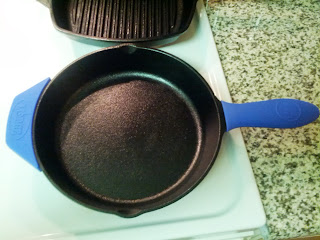 Above is a picture of our cast-iron -- a Lodge Logic 10" Skillet (here). It costed $16 when we bought it. The blue rubber handles are separate accessories that we purchased to avoid burning our hands when touching the handles. The main appeal of using cast iron is that after cooking, you don't need to wash it.  Okay, you should probably rinse off/towel off any food bits if you want to avoid cockroaches, but otherwise, you want whatever oils from what you last cooked to dry onto the surface. We found it easy to rinse the skillet in hot water just after cooking. Then towel it dry and dab a bit of oil onto the surface. Note: If you wash the skillet with soap, the coating of oil will come off and you'll have to re-season the skillet which takes at least an hour.

After a week of cooking, we found the food that we've cooked getting tastier and tastier.  The taste of each cooking has gotten richer as each previous cooking's flavor soaks into the skillet. Also, the skillet becomes more and more non-stick over time as the oil coating thickens. The only downsides that we experienced with the skillet are:

I'm looking forward to cooking with the cast-iron tomorrow. It's a lot more fun to cook now that I don't have to clean as much.